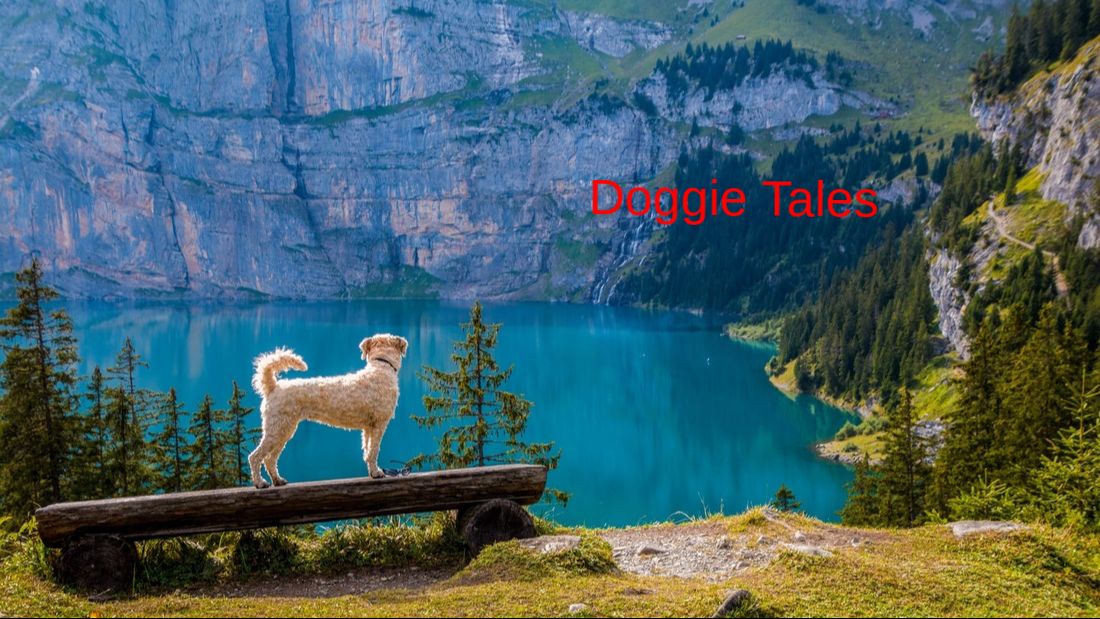 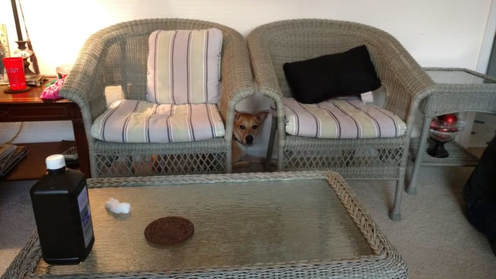 Dogs are People Too!
Posted on January 16, 2017 by Patricia Logue
​
Some people preach against anthropomorphizing dogs. They aren’t people. They don’t have the same feelings and motivations that people do. Don’t try to understand them on that level. But what if dogs play a double role in life? What if they act on their own behalf and also on behalf of the humans who own them? Maybe they are extensions of ourselves, shining a light on the most unique parts of ourselves. If I am on the right track, my award for All Around Unique Person of the Year goes to a wonderful lady named Wanda and all the lovely aspects of herself she is so willing to share with others.

Sitting on her living room floor, I get the feeling that every four-legged creature present is as eager to visit with me as is Wanda. I first notice Bentley, the silver-haired Schnauzer, who sits regally, as only a Schnauzer can, and surveys this assemblage of dogs and people proudly. Bentley is the only male, the alpha, yet that isn’t the source of his satisfaction. He enjoys watching the interactions of all who are gathered. We’re a good movie come to life for him, and he’s always happy to watch a good movie.
​
Marilyn (yes, as in Monroe) is the large, muscular chocolate brown Pit Bull who despite her size is very girly and wants to be adored. She inevitably drapes the massive front end of her body over my legs as if she’s a teeny dog and promptly falls asleep on the lap of a stranger she’s never met before. Pepper is a black Min Pin who is beside herself with delight at finding her living room filled with potential playmates. She’s putting on more weight than is proper for a min pin, but Pepper needs the extra calories for shredding toys and pulling ornaments off the Christmas tree. Pepper stares deeply into Wanda’s eyes as she is gently but firmly corrected about these issues with a pointed finger. Star is the elderly white and brown spotted American Bulldog battling a terminal illness and living the final days of her life midst this terrific assortment of people and animals. Star still has a good deal of puppy left in her and she has no idea she is ill except that she may sometimes wonder why Wanda fusses so over her diet. Finally, we make our way to Zandra, the skittish blonde Lab-Greyhound mix who has been watching all of us from behind a chair. She wouldn’t think of leaving the room. She is having a grand time, comfortable playing her role as observer. She is keenly aware when we talk about her and she enjoys the attention from a distance.

Wanda analyzes each dog’s personality, telling stories about them and revealing their secrets, which if they were human they might resent. They are not human, of course, but in their own way they also reveal something about Wanda that is no secret at all. She is an open book. Which is refreshing. There is no pretense here. She is completely open to share her own stories with her guests. Furthermore, she is completely accepting to all who enter her home, human or canine. I feel completely welcomed here in the home of someone I am meeting for the first time. That is how I expect each of these dogs feel.

So I’m dabbling with this idea of dogs being able to take on a part of their owners’ personalities. Maybe the more dogs we own throughout our lives, the more willing we are to understand the deeper aspects of our own personhood and to share that with others. Perhaps people who are accepting of our four-legged friends don’t have to only love humanity from afar, never being quite willing enough to take the risk of opening up to people one on one. Perhaps each beloved dog who shares our home also shares the blessings of who we really are deep down inside. I think that’s something worth pondering.

Wanda is a much loved, much treasured foster parent for Hands to Paws 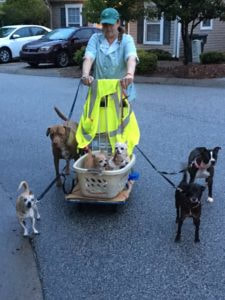 All in the Family Tree
Posted on July 17, 2017 by Patricia Logue

Hands to Paws is always looking for foster homes for our rescue dogs.  One reason people tell us they hesitate to foster is that they already have too many pets or that they are concerned that bringing another dog into the fold could be disastrous.  The truth is, however, that a number of our foster parents actually already have large packs when they decide to foster.  I think it all boils down to an old saying — the more you do, the more you can do.  You adapt and soon enough adapting is just business as usual.

When I met Linda Wellman, I knew I would be writing about her ability as a master of adaptation.  First of all, her home is beautiful.  It doesn’t look at all like a dwelling scratched, mauled, and polluted by hordes of unruly creatures.  She has her bag of tricks to protect her home, and it is clear that she requires the animals to do some adapting of their own.  Visitors are not attacked as they enter her home, for example.  Animals sort of wander in one here, two there, another, and another, and pretty soon I realize that Linda is presenting me the history of each and every creature.  I hear their personal stories, sometimes even the stories of their much loved parents who have moved on to a better place.  I’m frantically writing in my notepad trying to keep up with all these pet names and I have to contact her two more times to check my facts.  Finally I end up drawing a family tree.  Even now, I’m not entirely sure of its accuracy, and the ancestors who have passed on are not included though in Linda’s heart they are as much a part of the pack as ever. 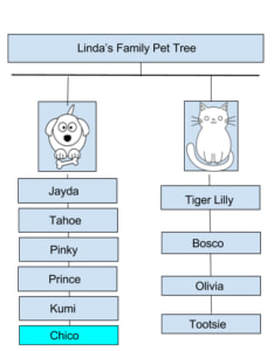 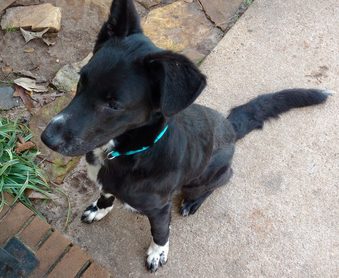 The Big Black Incursion
Posted on June 8, 2017 by Patricia Logue 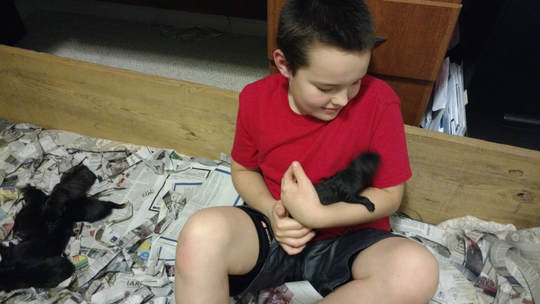 The day my husband brought home 3 large black dogs he found in a ditch along the side of a country road near our home certainly felt like an incursion.  Normally, he would have been a responsible person and called the pound.  But something deep inside of him called to him to reach out to these 3 needy canines, all of whom had big personalities and would have a big impact on our family. When we took them to our vet for vaccinations, we discovered that one of the dogs, Daisy, was pregnant, very pregnant.  Now bringing home 3 dogs in one day is a big adjustment, but to discover that my husband really brought home 9 dogs was outright overwhelming.  We were in the family way and there was no turning back.  I will not even go into the details of the countless vet visits to analyze and heal the host of maladies accompanying these strays, putting meat on their bones, and immunizing them.  Not to mention the ordeal of building the maternity ward as the pups started arriving just days after the vet told us we would be grandparents.  (It almost felt like the vet himself caused the pregnancy.  “Hey, we just brought you a big black dog to vaccinate!  She wasn’t pregnant before we came in here.  Just what kind of joint are you running here?)

Nevertheless the pups came F-A-S-T and I believe my husband set a record building a doggie maternity ward nearly as rapidly as mama Daisy popped out the pups.  One thing I found very comforting. Daisy knew what to do.  She’d been round the block before, maybe a few times.  I had visions of us pulling out reluctant-to-be-born pups, wiping up blood, and massaging lungs or performing mouth to mouth on pups who weren’t sure they wanted to live.  Daisy took care of it all and we stood by and watched in wonderment.  That is, I stood by and watched in wonderment at the beauty of motherhood and at the carpentry skills of my husband which I believe are every bit as admirable.

Now, important to the understanding of the title of this article is the fact that we were not petless people to begin with.  We have always had dogs and cats, even horses, rabbits, and guinea pigs.  We had never been petless.  Our regular four dogs and 5 cats were all still very much part of the daily routine.  They seemed perplexed that we had snuck in 3, no 9 more dogs!  And their bewilderment was justified, for the big black incursion brought with it surprising challenges.  We began to feel like we had taken on an Eliza Doolittle mission in trying to teach these diamonds in the rough some manners concerning even the smallest of actions that you would expect any common dog off the street to know — like don’t knock down the person carrying your food, don’t eat the chihuahua, don’t stand on the desk, and don’t chew ink cartridges.  Every single day of the big black incursion was an adventure into the unknown.  I felt this full throttle when I opted to take on the task of turning the 2 year old full-of-life Harley into a gentleman with obedience training.  It went fairly well and I’ve learned a kind of patience I didn’t quite master even after 34 years teaching elementary school.  The kids will laugh at you, but they can’t take off at a full gallop dragging you on a leash.  PATIENCE..it’s the secret to everything I keep telling myself.

But nothing,nothing, nothing, no classroom of children, no wild bucking dog, and no large hairy black face poking into your business every waking hour of the day even compared to the care of the six black puppies.  My husband, the dog rescuer and maternity ward carpenter became the night and day nursing staff to this adorable set of fuzzy little boys and girls.  I was most impressed. The pups and Harley were happily adopted out.   The other 2 big black dogs, mama Daisy and Clara found homes right here with us.
​
The big black incursion taught me that caring for animals in need is an amazing experience. Whether you save a dog in a ditch or foster one of the precious ones you see here on the Hands to Paws website, you’re signing up for a joyful ride for both you and your new canine friend.
Pat Logue is the secretary of Hands to Paws.  She and her husband David are now official foster parents.